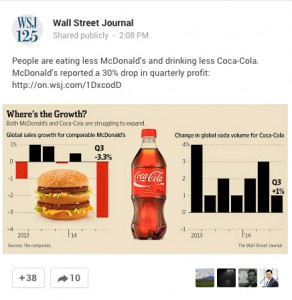 Many iconic brands have fallen by the wayside down the years, for a number of reasons. Kodak and Levi’s are but two that come to mind. Two more quintessential American brands are finding it’s often harder to stay iconic than to become so. Of course, Coca-Cola and McDonald’s are also among the most resilient brands in the world but both will need some major course-corrections in the coming quarters.

Coca-Cola’s issues are for another post. In the case of McDonald’s, it has fallen short in a couple of key areas, and is paying the price. It hasn’t sustained the brand with enough relevant innovation; and it has allowed rivals such as Chick-fil-A to usurp its once-unassailable position as preferred fast feeder for families (qualitatively, at least). Combined with the fact that its conscious appeal to teens and young adults is increasingly diluted by more compelling alternatives, McD has its work cut out.