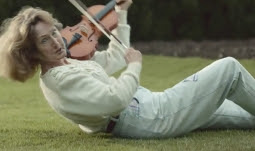 Remember when the “Man your man could smell like” campaign came out for Old Spice? It was often compared with Dos Equis’ “Most interesting man in the world” campaign. As I posted at the time, there is no comparison. Sure, there may be some kind of “spokesman” angel (in truth it was not that important to the OS campaign, as Isaiah Mustafa was not that well known), but the Dos Equis campaign is based on a brand idea. Old Spice’s campaign was based on execution.

I don’t know if this new Old Spice campaign will offend the buyers (moms), as discussed in the article. I’m not even sure it will appeal that much to the users (young men). The insight is paper thin.

“Knowing that we had some pretty awesome innovation [a new molecule that lets scent last all day to prevent over-spraying] we set out to talk to a younger target”, says the marketing director. Yes, this seems targeted at a really, really young user profile. But on the subject of targeting, wasn’t the idea behind the “Man your man..” campaign that buyers (I read a lot about girlfriends buying for their boyfriends at that time, not moms for kids) found Mustafa appealing? Have the Old Spice user/buyer demographics changed that much in so short a time?

A revealing signal at the time was all the chatter about how successful the Old Spice campaign was in the digital area (eg, how it “increased Facebook interaction by 800%”). I say revealing because when most of what you hear about for a campaign is success in the digital area, you should look closely at the campaign fundamentals. “Old Spice’s 60-second “Momsong” was “the No. 1 viral video in the world” on Jan. 6 claimed Old Spice Marketing Director John Sebastian in an e-mail.” Yeah – even more than the one with the cat cooking its own dinner.

Finally, the product innovation does indeed sound promising. Of course, it is nowhere present in the current ad, but that is acknowledged in the article (presumably we’ll see some related communication). But again, that just raises further questions about the wisdom of this advertising.